It is said that there were a thousand more or less secret agents in Stockholm during the war. Ideally, they lived on Östermalm and Gärdet. Against Stureplan and Strandvägen for foreigners. And close to Karlaplan and Valhallavägen a concentration of Swedish intelligence operations.

A good starting point is the T-station Stadion on Mörbybanan. 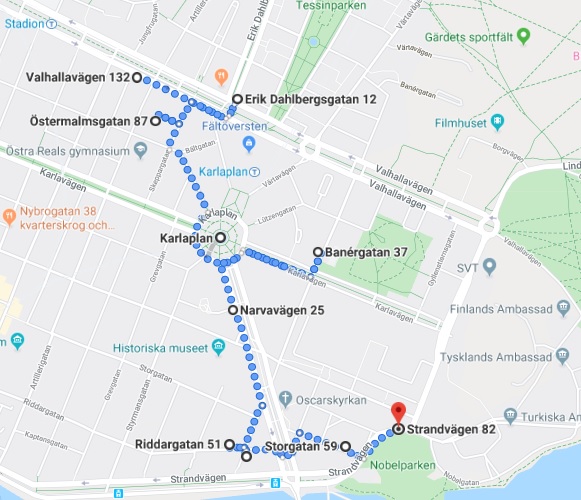 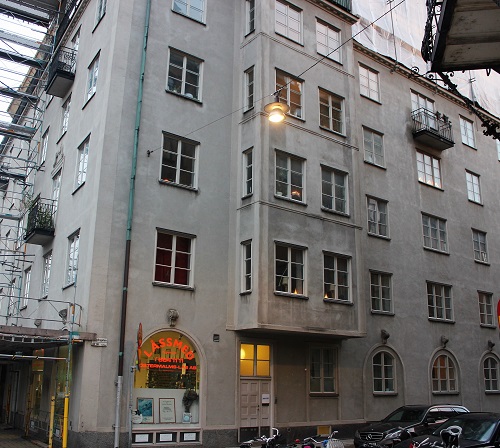 The main spy Stig Bergling copied secret military documents and locked them in the paper in Handelsbanken’s bank deposit box on Erik Dahlbergsgatan 12. It was free. For those in charge, forgot to lock the document cabinets at the Swedish Defense Forces security department, which was located at Östermalmsgatan 87 . When Bergling received UN service in Lebanon, in 1973, he sold the documents to an officer of the Soviet military intelligence operations GRU. 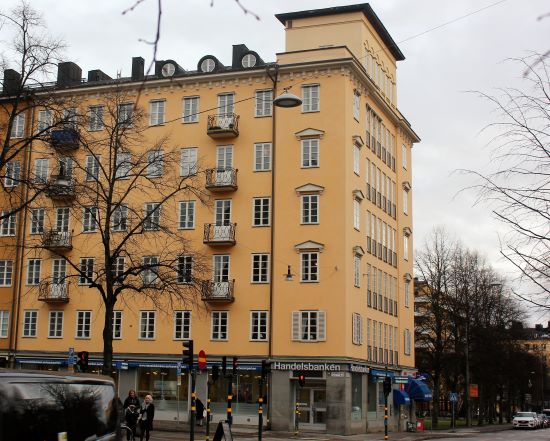 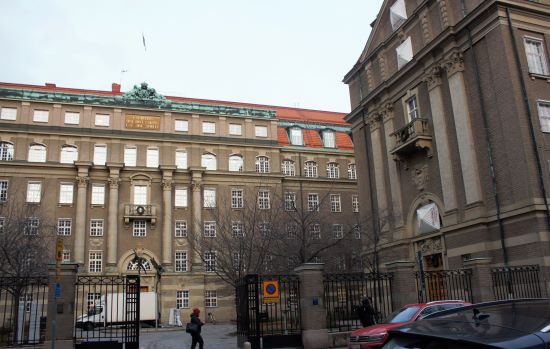 Before the Armed Forces moved to Lidingövägen, the business was run in the Gray House, which was called the Generalität . During the war, shelters were built under the house from which ÖB and his staffs would lead the war. Colonel Stig Wennerström worked here and probably also the spy Stig Bergling. The Defense Staff moved to the Headquarters on Lidingövägen in the early 1970s.

Olof Palme had his own room in 1953 when he served for the Defense Intelligence Service. He was recruited by Nazi-minded officer Lennart Hagman. At the same time, Palme was the student body president and was able to report from both international conferences to his employer and the US CIA. Palme became the hand of Tage Erlander but his friend Birger Elmér remained, later as head of IB. 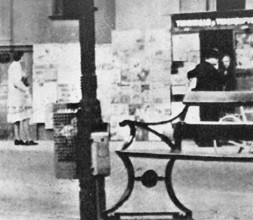 Thorner at the kiosk 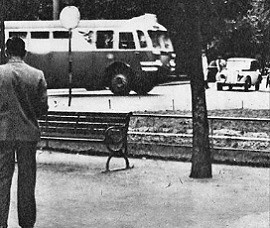 A radio war was waged in the street. At one end, at No. 59, the German legation’s radio department transmitted encrypted information. Near the other end of the street, Karlaplan 4 (where the Maxim Theater now exists), German telegram traffic was decrypted on the telecommunications network between Norway and the German legation at Blasieholmen. 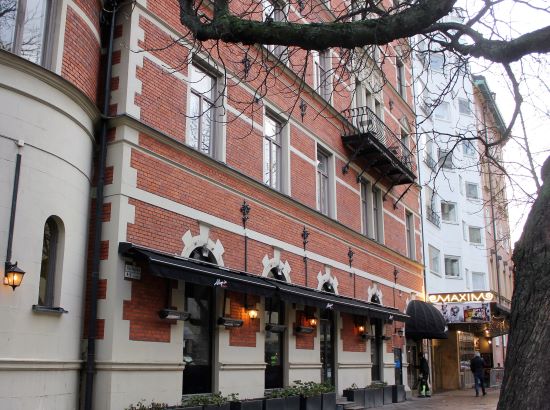 Mathematics professor Arne Beurling managed to break the code of the encryption machine Geheimschreiber with paper and pencil in the summer of 1940. 300,000 decoded messages have gone down in history as one of the largest cryptoanalytic achievements of the war. The German attack on the Soviet was known before. Had they intended to attack the country from Norway, they would have been warned,

The business must move and became neighbor to Drottningholm castle in Lovön in 1943 with the new name of the Swedish Defense Radio Agency. In part, FRA was equipped with signal voltage equipment and crypto keys from the Finnish signal voltage, from a mass flight called Operation Stella Polaris. The fear of the Russian got 750 people with a lot of pack thighs with Soviet info to flee across the Baltic to Härnösand in three ships. Then as a stopover accommodation and microfilm at Karlaplan 4 and Hotell Astor at Mariatorget 3 (now owned by ABBA legend Benny Andersson). The Finns made a hack at selling material to several intelligence services, even to the Japanese.

The Norwegian legation / embassy moved here from Strandvägen 1940. At the end of the war, a thousand Norwegian resistance men were administered from here. One of the eighty employees of the Eligation Press Office was Calota Brandt, wife of Willy Brandt. 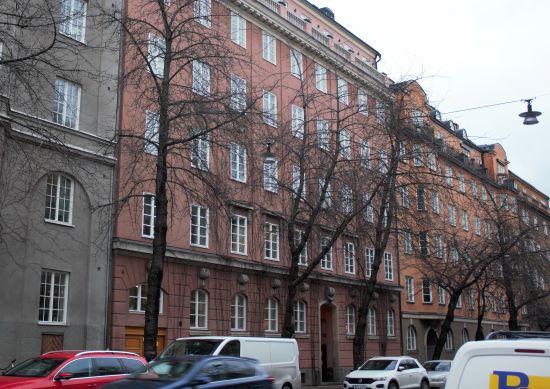 Supported by the Norwegian legation, Brandt and two syndicalists start the summer of 1942 Swedish Norsk Pressbyrå. The agency on Vasagatan communicates Norwegian news to seventy Swedish newspapers. It contributes to the magazine Handslag with the author Eyvind Johnson as a formal publisher and Brandt as editor. It is printed on thin paper for easier smuggling with couriers to Norway.

In the funk house on Gumhornsgatan, Russian legation manager Alexandra Kollontaj lived in a standing floor. Despite being born into a noble family, she survived Stalin’s purges. In Russia as a communist called Comrade Kolllontaj. In Stockholm for her upper class friendship known as Madame Kollontaj. As a diplomat, she knew how to move in among entrepreneurs, cultural figures and royalty. Watch video. 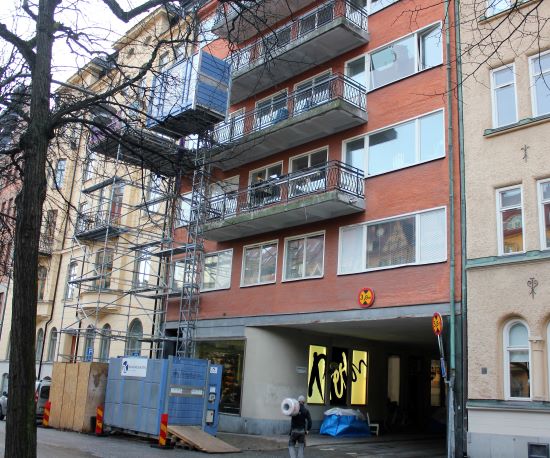 Kollontaj was the intermediary in the peace negotiations between Tinland and the Soviet Union in 1940 and 1944. At the same time as Kollontaj and President Paasikivi negotiated in Saltsjöbaden, Russian aircraft dropped bombs over Södermalm and Strängnäs.

People from the embassies often visited the Eskader store on Gumshornsgatan where they bought ship models for their war games. Found now on Count turegatqan. 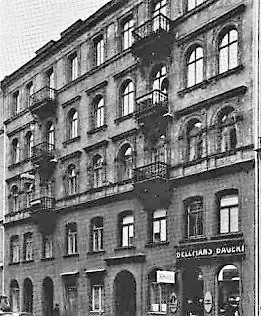 For her livelihood, the widow Augusta Ternberg had lodgings in the apartment at Riddargatan 51. She was born in Latvia and often had tea invitations for her ex-Baltic friends, which her son Helmuth Ternberg continued with after her death. One of August’s guests was Elisabeth von Knieriem, who brought her son Olof Palme. 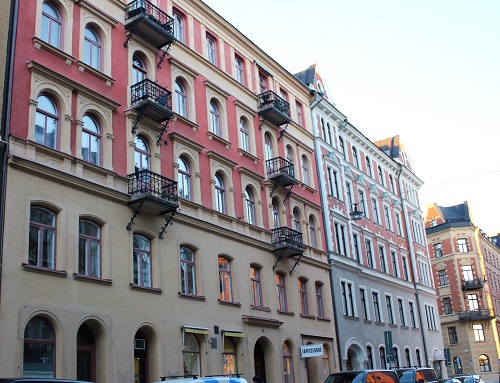 As early as 1938, a friendship arose between twelve-year-old Palme and sacked Captain Helmuth Ternberg, 45 years old. Both mother-bonded and with dead fathers, which may explain a father-in-law relationship. The Baltic was relevant for their mothers came from Latvia.

In 1944, Palme took the student in Sigtuna celebrated by Ternberg, who offered the newly baked student a job at Svenska Dagbladet’s sports editor. Perhaps it was Ternberg who inspired Palme to become a secret agent in 1953 at the Swedish Defense Forces Intelligence Agency on Östermalmsgatan. 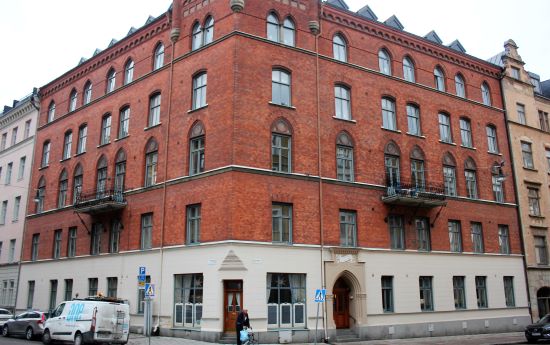 With five million sold items from around ten Hamilton books, Jan Guillou could afford to live with his Anna Skarp in the apartment on the finest Östermalm, Banérgatan 4. At a comfortable distance from their Pirate publishing house on Kaptensgatan 6 – in the house where Goebbel’s propaganda center during the war sought almost Swedish cultural elite. Also the literary figure Captain Carl Hamilton lived during the study period at Östermalm and at the same time as a socialist participate in Clarté.

Several at Hamilton are recognized by Guillou. During the year the FiB journalist sat on Långholmen to reveal social-democratic cooperation in the military’s IB, he wrote the first book, If the War Comes. The author and his novel character have in common that both for payment have worked for the KGB .

Olof Palme later wrote about the memory of a tea invitation from his uncle, where Gilel Stoch and Felix Kersten talked about a rescue operation for prisoners in the concentration camps. The location was Ottokar von Knieriem’s ​​apartment on Storgatan 59 and the year was 1944 when Palme took the student. Uncle von Knieiriem was also led into exile and also headed the Dresdner Bank branch on Kungsträdgårdsgatan. Otto had problems with a hip and was therefore a patient with Kersten.

Olof’s mother Elisabeth, born Knieriem, took care of Otto in Stockholm. As a German-born and educated in Germany, it was natural to, together with Princess Sibylla, participate in an association, which sent gifts to soldiers on the German front. But the Nazi girl, like some of the relatives in Germany, was not her.

As a masseur, Kersten had close contact with Heinrich Himmler and also with Swedish Foreign Minister Christian Günther, who wanted to get the imprisoned Swedish directors in Poland freed. Execution threatened because they testified about the extermination of the Jews to the outside world. 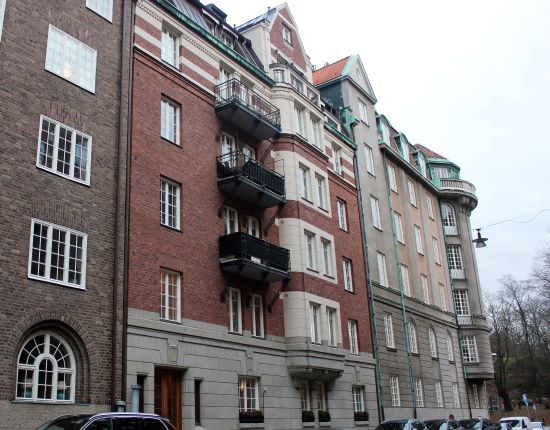 How much Nazi von Knieriem was is unclear. But it was his superior in the bank, SS member Karl Rasche, who used to live with Knieriem on Storgatan during the Stockholm visit. The bank handled the SS financial transactions.

Rasche was sentenced to seven years in Nuremberg. The Allies protested that after the war, von Knieriem was granted a Swedish residence permit, which he obtained thanks to the assistance of the Wallenberg brothers and Olof’s brother, Claës Palme, the lawyer. Olof Palme’s most tangible memory from the tea party was how the corpulent Kersten sipped orange marmalade.

During the war, Britain’s legation rented the Bulowska villa in the Diplomatic City at the end of Strandvägen. The house was carefully cared for by the state police hidden among the trees where the Radio House now stands. Legation staff increased from four to four hundred, though some scattered throughout the country. About one hundred belonged to the intelligence service. Memorable TV viewers recognize the exterior of the Soap Company. Today the Turkish embassy is located there under the new address Dag Hammarskiölds väg 20.

British Ambassador Victor Mallet did not like to bring Special Operations Executive into the house of espionage and sabotage does not belong in classical diplomacy. Sabotage in Norway went well. But when a German ammunition train exploded in Krylbo in the summer of 1941, the SOE was suspected and the chief Malcolm Munthe was expelled.

Malcolm was Swedish English as a son of Axel Munthe, life doctor and perhaps lover of Gustaf V’s painting Victoria. With the title of military attaché as a cover, he prepared a Swedish resistance movement in collaboration with the writer Amelie Posses Tuesday Club . After the expulsion, he led motor torpedo boats from Capri during the Italian invasion, where he was at home thanks to his father. 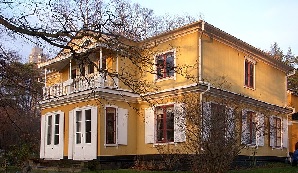 Prior to October 1943, British “press attaché” Peter Tennant lived at Bergshyddan on Djurgårdsbrunnsvägen 54 , not far from Djurgårdsbrunn’s inn. Ingrid Bergman lived in Bergshyddan before moving to Hollywood.

Secret agents don’t want to be seen. Tennant, on the other hand, paddled in a CD sign (Corps Diplomatique) canoe from the residence at Djurgårdsbrunnsviken to the legation in Diplomatstaden on Strandvägen 82 (Dag Hammarskiölds väg 20), where he was head of sabotage and other undercover at SOE (Special Operations Executive). In the same spirit as his fictitious colleague James Bond at MI6.

With his humor and charm, Tennant was a popular guest when prominent Swedes offered dinner and sailing trips. The language was no problem as he spoke Swedish perfectly. He probably dined at Djurgårdsbrunn’s Inn, the pub where Raoul Wallenberg planned for the trip to Budapest with American diplomat Ivers Olsen.