In the corner of Rindögatan in the gap between the houses, the Ladugårdsgård expands. That foreign intelligence officers, more or less anonymously, gladly settled here during the war years was probably not just for modern apartments. In the fields the military practiced and early mornings the tenants were awakened by ointments from the shooting range. Summons filled barracks, which are now museums. Here and there were firearms and playgrounds , as protection against paratroopers and gliding. Along with barbed wire ready to be rolled out. The rock under the castle hid a secret control center.

Did the German legation use an apartment in the house as a stand-in for an air landing? Or to keep track of the many Swedish officers who lived in the neighborhood, close to the staffs and regiments. 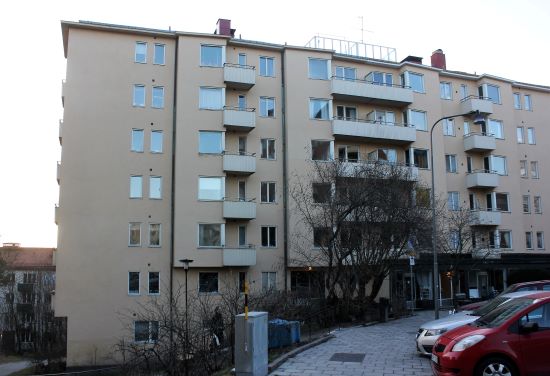 Early the morning of June 27, 1945, the maid finds a suit-wearing person dead at the top of the stairwell on Rindögatan 42. Blood flows from her head and a gun is found in her right hand. Kai Holst , during the war leader in the Home Front organization Milorg, has died by suicide. This was stated by the Swedish police without going to the bottom of the investigation. Trauma from the war and tuberculosis may have contributed.

Although he does not believe his closest. 28 years, newlywed, diplomatic status at the Norwegian Stockholm Embassy and by train ticket to the home. Everything speaks for murder. And why this place? Another fingerprint was found on the gun and Holst was left-handed. Something to bite into for Leif GW Persson, but he was then just a baby in a Gärdet apartment on Tegeluddsvägen 30 , opposite Friskis & Svettis.

With credentials as a central leader in the resistance movement, Holst had arrived by train from Lillehammer the night before to work at the Norwegian embassy. He came by car to Rindögatan and knocked on doors in the house without being let in. 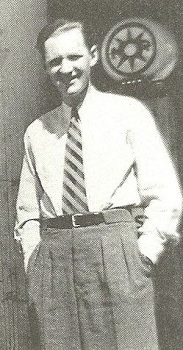 Both the Norwegian and Swedish authorities appeared to sweep away the investigation, which accelerated the conspiracy theories. One was that he discovered irregularities in the home front of Milorg.

Another theory was that Holst was known for the so-called Lillehammer Cup . Two intelligence services, the Swedish Defense C-Bureau and the US Office (Office of Strategic Services), kidnapped 35 German signal detectors after the war, in front of the British occupiers’ nose. The Germans with Russian codebooks were flown from Gothenburg via Germany to the USA. Astrid Lindgren’s manager Harry Söderman participated in the coup . “Revolver-Harry” in Sweden had equipped the Norwegian resistance forces and freed the prisoners at Grini the day before the capitulation. The Lillehammer Cup was kept secret from the Russians, which may have caused Holst’s death, perhaps with the help of Swedish agents.

The German spy company had an apartment in the neighboring house no. 44, also with a view of the Gärdets field. Another tenant was Dr. Inoe, who was the private secretary of the Japanese military attache Onoe 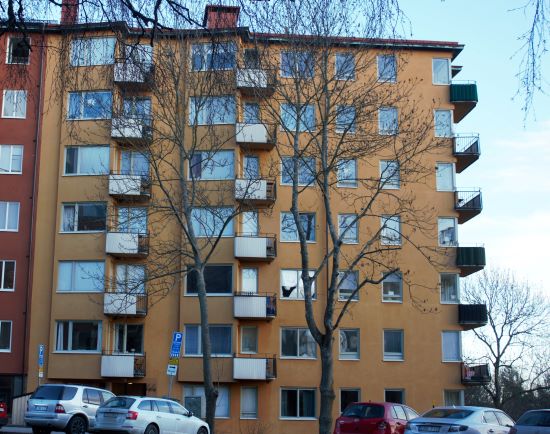 It was hidden that Gilbert served as a major in the SD Sicherheistsdienst during Himler’s SS. But now the case of competing Admiral Wilhelm Canaris went to the German army intelligence service Abwehr. The probe with the Russians was postponed by the Allies. After the attack against Hitler in the summer of 1944, Canaris was executed in April 1945.

Also the head of SD Sicherheitsdienst, Schellenberg, was in Stockholm and probed for separate peace with President Roosevelt’s friend Hewitt. Contact was initiated by Himmler’s masseur, Felix Kersten, resident on Linnégatan 8. The first initiative came from Latvian businessman Gilel Storch , who lived on Furusundsgatan 10. 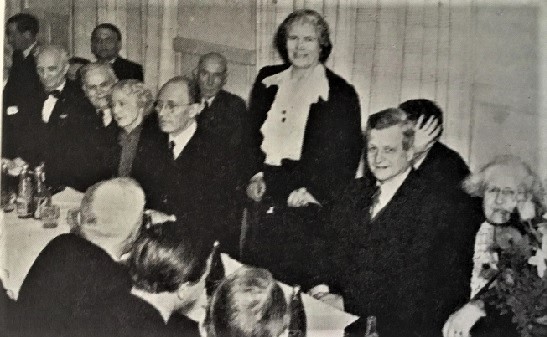 Countess Amelia Posse on Rindögatan 44 gathered anti-Nazis in the Tuesday club, where members came from both left and right. One was Karl Gerhard , who was banned from Swedish self-censorship singing a couplet with nose satire. Another was the German-minded king’s brother, Prince Eugen. Some were left-wing radicals, like the couple Gunnar and Alva Myrdal. Ture Nerman was a prisoner at Långholmen for in the newspaper despite having forged Hitler.

Resistance was strengthened in the club’s debates. Nazi sympathizers were registered and reported to the security police. British SOE (Special Operation Executive ) sabotage supported the club’s secret cells to be prepared if the country was occupied. Secret networks of radio transmitters and guerrilla warfare were included in the arsenal. (Deputy Director of Stockholm for SOE was British saboteur Malcolm Munthe , son of Queen Victoria’s life doctor Axel Munthe). 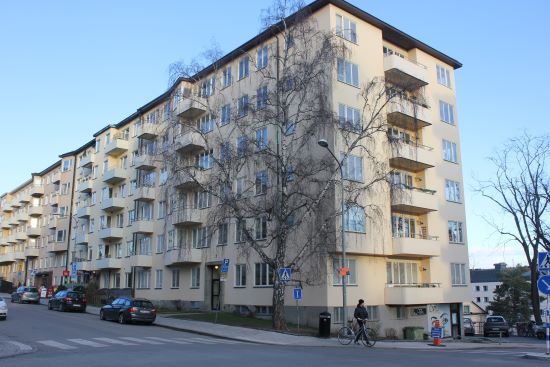 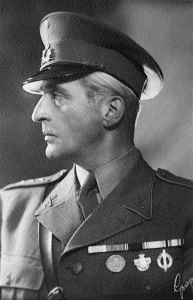 Who was the German military attache Albrechtsen who lived on Furusundsgatan 19 during the war? Here, too, overlooking the Gärdet. Captain Frithiof Trulsson was tried in 1946 for having informed Albrechtsen about Swedish military activities during the war years. In 1942 Trulsson had sneaked across the border to the Lillehammer area from the Sälen location to hang out with German officers. PFixed parties, sailed in the Royal Sailing Club and spent time with the German military attaches on Strandvägen 7A. 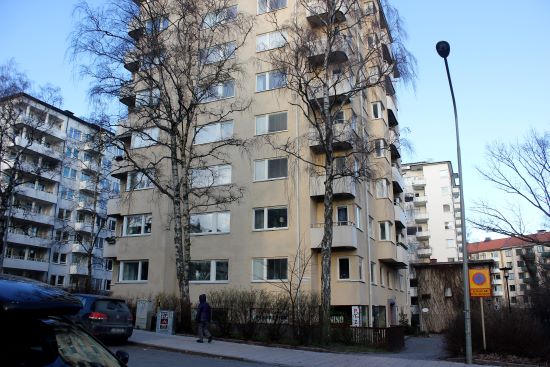 Businessman Gilel Storch fled with his family from Riga to an apartment on Furundsgatan 10. The attempts to save Jewish relatives led to contact with Himler’s masseur Felix Kersten , who after 1943 traveled between Berlin and the apartment on Linnégatan 10. Kersten helped Foreign Minister Gunther to free the Swedish the directors of alleged spying were imprisoned in Warzava and threatened with the death penalty.

Kersten assisted Foreign Minister Günther to free the Swedish directors who were threatened for alleged espionage with the death penalty in the Warsaw prison.

The head of SD Sicherheitsdienst, Schellenberg, was also in Stockholm and probed for separate peace . It happened at Hotel Plaza (Birger Jarlsgatan) with Abraham Hewitt, SOE agent and friend with President Roosevelt. The contact was initiated by Himmler’s masseur, Felix Kersten, resident on Linnégatan 10. Originally, Kersten was engaged to free Jews by Latvian businessman Gilel Storch, who lived on Furusundsgatan10. The United States declared the peace initiative and Hitler was not interested either. 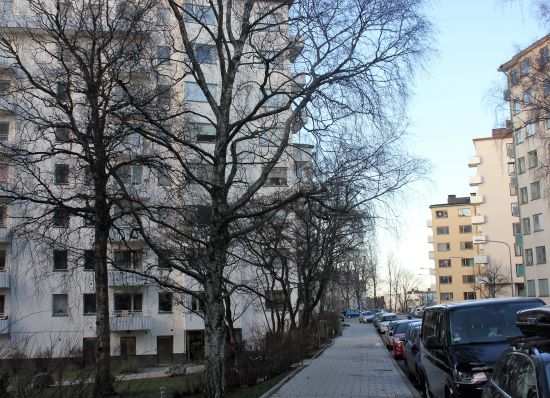 Kersten assisted Foreign Minister Günther to free the Swedish directors who for alleged spying were imprisoned in Warsaw and threatened with the death penalty.

She was the big star of the Swedish film during the war. But Sonja Wigert lived on Furusundsgatan you do not know. Only that she was there guarded by the security police or the defense counter-espionage C bureau. Although she reported frequently to the same Säpo and was recruited as an agent for the C-office.

Sig Wennerström and his family moved there after serving as a flight attache in Moscow 1940-41. After two plane crashes, Wennerström was stopped in his career. But with language skills in German and Russian, he was a salon lion – crowned as an adjutant to the present king’s father, Prince Gustaf Adolf. In October 1942 and January 1943. Afterwards, it has been found that Wennerström provided the Russians with information about German aviation on the eastern front. While giving the German military attachment facts about the Russian military on the same front.

Another spy legend in the Stockholm district was Karin Lannby , who once lived on Furusundsgatan. She was an actress who appeared in films such as Doctor Glass with Georg Rydeberg. Cohabitation with Ingmar Bergman, who had her as the role model in the film Woman without Face. What Bergman didn’t know was that Lannby was at the same time secret agent Anette for the Defense C Agency. Together with the other in Secretarial Club , she had the luxury restaurant area as a base a sophisticated interaction in diplomatic circles.

She was then part of the counter-espionage for the Defense Intelligence Service recruited by Helmuth Teddy Ternberg. She wrote reports from her work as secretary to German journalists. In the apartment on Furusundsgatan on Tuesday she had tea invitations for secretaries to important Germans in Stockholm. 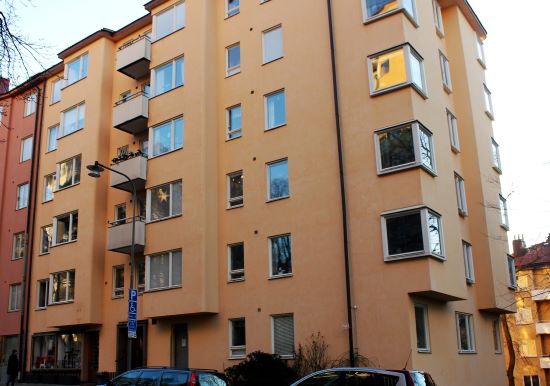 On February 27, 1943, the security police detectives see a Swedish aircraft captain walk into Rindögatan 16. Interesting where the Soviet military attache Nikolaj Nikutusev lives . The shading afterwards leads to Furusundsgatan 7, where it says Wennerström on the door. The telephone interception showed that the officer called the wife from the Russian apartment.

Wennerström became extra cautious so the state police’s check of mail and telephone revealed nothing unreasonable. Other than that he and his family kept in touch with both German and Russian military attaches. In September, Wennerström calls Nikutuschev and asks for a visit because he will serve on the F7 Såtenäs fleet for a few years. The visit will be three days later.

In 1942, Russian ambassador Alexandra Kollontay invited Wennergren to lunch. There were rumors that secret information was provided but it need not be so. Kollontaj stated that Folke Bernadotte would attend.

The decryption of telegrams from the German Stockholm Embassy stated that Captain Wennerström informed about Russian peacekeepers. An ouster from the managers was the only punishment.

During the days, Wennerström was in charge of the Navy at Lake Vänern. At night, he copied secret documents that the Russians received. Without detection despite the State Police keeping an eye on him during the rest of the war. Not even when a fancier reported him photographing American bombers parked on the F7 after an emergency landing.

The couple Petrov, who spied for the Soviet NKVD , lived in the house from March 1943. Jevdokija as a sergeant and as a writing assistant she provided information from Swedish informants. Vladimir ciphered telegrams and kept track of other Russians, including Ambassador Kollontaj. . The security police shadowed Petrov from Rindögatan to the embassy on Villagatan 43 and also participated in a hide-and-seek game in the city. A scout was Otto Danielsson who was asked to interrogate the couple in Australia after the 1953 departure. 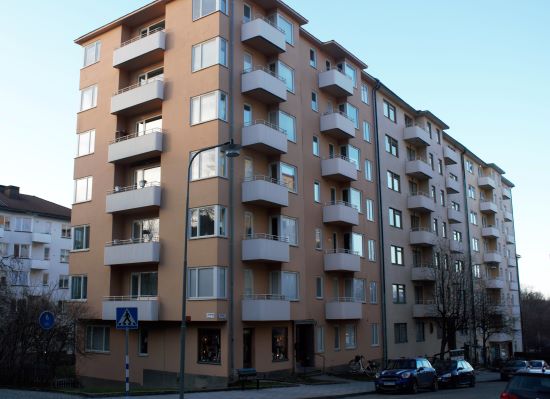 The US military cultivated the cipher in the Russian telegrams, where some were sent from Stockholm. As a help in the so-called Venona project, they had the Russians’ codebooks that Swedish and American agents kidnapped in Lillehammer – which then sent to the US via Sweden.

Around 1950 lived the opera song Carl Gustaf Svingel before moving to Germany. From the Haus Haus nursing home in Berlin, he participated in the rescue of 32,000 prisoners from the GDR. 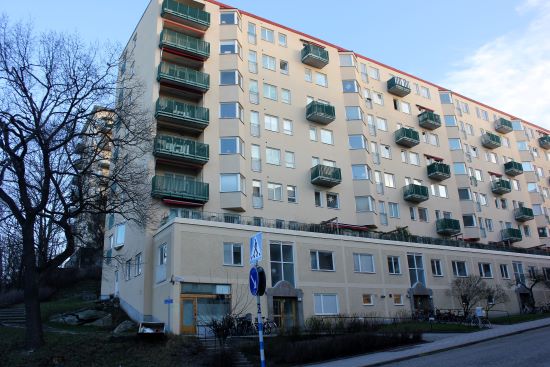 Secret organization  Försvarsstabens special agency (known as IB), after 1957 hid their office at Valhallavägen 56. But there was not as secret manager Birger Elmér but behind a door where the CGB companies were located on Rindögatan 5. In the gate was not Elmér’s name but however, on his secretary Inger Lottie Friberg. Their cars, both Volvo 145, were parked outside. It revealed Jan Guillou in the People in Picture. He collaborated with Peter Bratt who shadowed Friberg in Volvon for the Swedish Defense Staff and the IB office on Valhallavägen

IB tracked down Communists for the Social Democrats. Something that was facilitated by Elmér having been friends with Olof Palme since adolescence when they were linked to the intelligence service. Guillou and Bratt were sentenced to prison for illegal intelligence activities. http://old.fib.se/fib_1/IB/organisa.html

In October 1940, a plane landed on Bromma and Vasily and Alexandra Siderenko to settle on Erik Dahlbergsgatan 40. Officially, the 25-year-old Russian is the head of the Intourist but in fact the spy officer for the military intelligence service GRU. In a decrypted telegram to his homeland he was called Stege. The General Security Police kept an eye on the couple. Vasilij was arrested in 1942 on Vasagaen 12 and received twelve years of criminal work at Långholmen. The government did not give in to Russian pressure to release him, until Russian flight in February 1944 bombed the Tantolunden on Södermalm. Three days later Siderenko was pardoned. 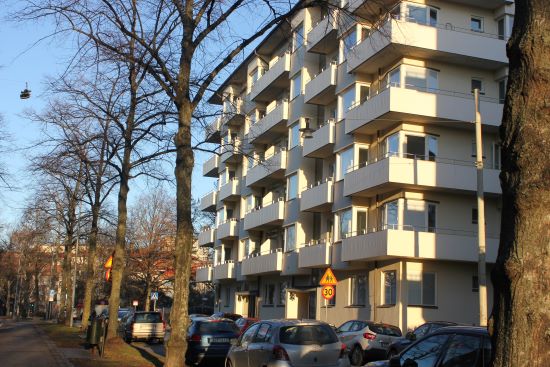